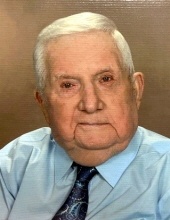 Emmett Stewart Christman was born December 1, 1920, in Tuscaloosa, Alabama and died on February 14, 2022. His funeral service will be at Lakeshore Baptist Church on Thursday, February 17, 2022. Visitation will be at 10:00 A.M. followed by the service at 11:00 A.M. Interment will follow at Mulhearn Memorial Park Cemetery.

Emmett grew up in Monroe and attended Ouachita Parish High School and Northeast Louisiana Junior College. He joined the US Army and served in World War II. At the end of the war, he returned to his job at Southern Bell Telephone Company. He was also active with the Telephone Pioneers organization. He retired after 42 years. He and Sybil were long term members at College Place Baptist Church and later at Lakeshore Baptist Church. His family and church were the center of his life. He was always ready to help anyone who needed assistance. His family wants to share that he was the kindest person and was always hospitable.

Mr. Christman is preceded in death by the love of his life, Sybil; his parents, Betty and Emmitt; his brothers, Wayne and Dan; and his son-in-law, Fred.

He is survived by his daughters, Debbie and Jan (Brad); grandchildren, Stewart (Marina) and Lynn (Steve); great grandchildren, Oscar and Leela; along with many nephews and nieces. Sheila Amos has been a very special friend to both him and his family.

In lieu of flowers, memorials may be made to the Louisiana Baptist Children’s Home, Lakeshore Baptist Church, or the charity of your choice.
To order memorial trees or send flowers to the family in memory of Emmett Stewart Christman, please visit our flower store.