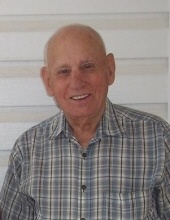 Mr. Kelley was born April 6, 1929 and passed away February 16, 2022. He served in the United States Army. He retired from Louisiana Public Broadcasting after 33 years and was a member of Ham Radio Club. He committed his life to Jesus at a revival and served God at several Southern Methodist churches throughout his life. He served as a lay speaker and filled in at several churches. Mr. Kelley was a part of the Gideons International Ministry for several years and he and his wife enjoyed hosting missionaries in their home. He would always carry tic tacs to church for all the kids. He loved our “Mama’s” biscuits, and always told us that is why he married her.

He was preceded in death by his wife, Bessie Lee Wheeler Kelley; parents, Isaac and Emma Kelley; four brothers and four sisters.

Memorials may be made to the Gideons International Ministry.
To order memorial trees or send flowers to the family in memory of Floyd Leo "Pete" Kelley, please visit our flower store.