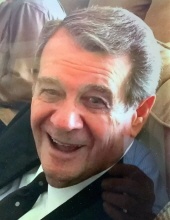 Funeral Mass for Mr. Frank Vincent Scalia, 86, of Monroe, LA, will be held at 11:00 A.M. Monday, May 16, 2022, at Jesus the Good Shepherd Catholic Church in Monroe, LA, with Very Rev. Michael Thang’wa officiating. Visitation will be held from 9:00 A.M. until time of service. Private burial will take place at Mulhearn Memorial Park Cemetery in Monroe, LA.

Mr. Scalia was born September 9, 1935, in Beaumont, TX to Mary (Danna) Scalia and Frank Rosario Scalia. Moved to Monroe, LA at nine years old, attended St. Matthew Elementary School and graduated from Neville High school where he played baseball and was an American Legion All-Star first baseman. He also had the lead in the senior play. He attended Northeast Louisiana State University and then entered the Marine Corps during the Korean conflict. He wrote for the Stars and Stripes and after honorable discharge returned to college in Monroe, LA. He married Marilou Anderson in September 1956. They moved to New Orleans beginning a 40-year career with Edison Brothers Stores, Inc. Retired as Executive Vice President of Sales and returned home in 1995. Frank was devoted to his family, his community, his country and his faith. His words of wisdom graced the pages of the Ouachita Citizen for years and will be sorely missed. His Facebook commentary and shares were legendary as were the numerous times he was censored from Facebook for speaking his mind!

In lieu of flowers, memorials may be made to the charity of your choice.

To order memorial trees or send flowers to the family in memory of Frank Vincent Scalia, please visit our flower store.