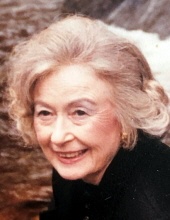 Graveside services for Freida Adams Brian will be held Wednesday, August 17, 2022, at 2:00 pm at Mulhearn Memorial Park Mausoleum Chapel under the direction of Mulhearn Funeral Home of Monroe. Dr. Welton Gaddy, a longtime friend and pastor, will be officiating. Freida was born January 8, 1927, and was preceded in death by her first husband, Major Michael J. Adams, her second husband, Dr. George C. Brian, her beloved son, Michael J. Adams, Jr, as well as her parents, Mr. & Mrs. Samuel Beard, her beloved sister, Faye Harris and brother-in-law Ken Harris, and her brother, Dalton Beard.

Freida was the perfect example of Southern charm and grace. She lived a full and exciting life, first as a test pilot and astronaut’s wife and then after he was killed in the X-15 rocket plane, she moved back to Louisiana and continued her education to earn her Master’s degree plus 30 hours (just shy of her doctorate degree) to pursue a teaching career and then after deciding to change direction, had a successful career as a counselor at the La State Employment Agency. After retirement, she continued to assist at the Beidenharn Museum as a docent for many years. Freida was a founding member of Northminster Church and remained active and attended regularly until her move to Texas. She was a member of the Monroe Garden Club, as well as the Ft. Miro chapter of the Daughters of the American Revolution, and a past member of the Review Book Club. Freida and her husband Dr. Brian, who was well known in the ULM community and active in the theatre community, spent much of their time involved in local events and activities. After Dr. Brian’s death and as time passed and her health eventually required, Freida decided to move to Spring, Texas to reside with her daughter and her family. She was well loved by her close family and Texas friends. Freida had an active spirit and insisted on getting up and dressing well every day of her life to the end. She was extremely witty and was well known for her etiquette advice and funny sayings and songs, many that she inherited from her mother and father, and she would continue to use daily.

We are also grateful to the caregivers in her life that helped her live long and well with her daughter. Lulu (Maria) Gomez and Amalia Cortinas were with her for many years, as well as a number of other equally wonderful helpers that provided the best of care and friendship.

To order memorial trees or send flowers to the family in memory of Freida Adams Brian, please visit our flower store.