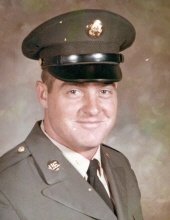 Bo was best known for his big laugh, big heart, and firm handshake. He never met a stranger. Bo graduated from Holly Ridge High School, where he excelled in all areas of athletics. He earned many awards and a football scholarship to Northwestern State University. But Uncle Sam needed him more and sent him to Vietnam as an Aircraft Electrician and Gunnery SGT with the United States Army.

When he returned from Vietnam, he continued his career with LP&L as a lineman. He loved being a lineman but loved the brothers he worked with even more. Bo retired after many years of service to his community.

Bo loved the outdoors. He loved spending time with his horses, fishing, hunting, and water skiing. He also never backed down from a challenge, especially a good arm-wrestling match. During hunting season, he could be found making memories and telling stories at the hunting camp. More than the outdoors, he loved his family. None more than his wife of 47 years, Fay. They shared a life of summers on the lake, traveling, adventures, laughs, tears, and a love that many dream of. He was blessed with five daughters who he protected and loved fiercely. Not a day went by that they doubted his love for them. Not only did he love his girls, but also their friends who knew him as “Daddy Bo”.

His grandchildren loved their Papaw because they knew they were his world. He loved having them sit in his lap, no matter how big they got, telling them stories of his glory days and watching bull riding and NCIS.

He was preceded in death by his parents; two sisters; and two precious grandsons.

Honorary Pallbearers will be Nicholas Williams and Brett Herrington.
To order memorial trees or send flowers to the family in memory of Henry "Bo" Miller, Jr., please visit our flower store.