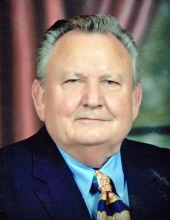 Hugh Malcolm “Mack” Calhoun a native of Sikes, Louisiana and a longtime resident of West Monroe passed away, surrounded by his wife and children, on Saturday, April 24, 2021. He is survived by his wife of 63 years, Jo Ann Parker Calhoun, his daughter Sarah Allbritton and husband Jim, his son Steve and wife Stephanie, his grandchildren Joanna Jewel Calhoun and Eli Malcolm Calhoun and his siblings, Kathleen Brister, Ollie V Tietje, and Royce Calhoun, as well as numerous nieces (one of whom was his favorite, she knows who she is) and nephews.

His Christian example, honestly, humor, and kindness influenced countless others and his positive attitude affected all around him. He would always say “This is the best day of my life!”.

Mack had a successful career of 42 years working at Brown/Olin/Olinkraft/Riverwood/Graphic Packaging. During the course of his career, he had the opportunity to start up papermills in both Brazil and Venezuela. After retiring from the paper industry, he was truly honored to be elected 4 times as Police Juror by the residents of Ouachita Parish’s District B. During his time on the Ouachita Parish Police Jury he served as Vice-President, Chairperson of Public Works Committee and on the Library Board, where he was instrumental in having a library constructed in the Woodlawn area. During his tenure he was elected to the Executive Board of the Louisiana Police Jury Association. Mack also served on the Sparta Ground Water Commission and worked to conserve the supply of water for all of North Louisiana.

Mack was a member of Mt. Vernon Baptist Church. He was a great sportsman and loved to hunt and fish. He loved to tell hunting and fishing stories, some of which were true. He traveled all over the country and to four continents but loved being with his family and friends most of all.

In lieu of flowers, memorials may be made to Samaritan’s Purse or the Louisiana Baptist Children’s Home.

Special thanks are extended to his physician and nephew, Dr. Keith Calhoun.
To order memorial trees or send flowers to the family in memory of Hugh Malcolm "Mack" Calhoun, please visit our flower store.