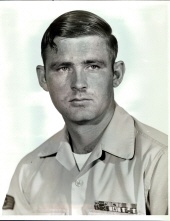 Our dad began his career as an MP/Dog Handler in the U.S. Air Force during the Vietnam Era. Upon completion of his military service, he began his career in law enforcement with the Madison Parish Sheriff’s Department and then later joining the Louisiana State Police. Early in his career with the LSP he was assigned to the Governor’s office. He eventually earned the rank of Lieutenant and worked as an investigator with the Criminal Investigations Bureau. He was a graduate of the FBI Academy. After many years of dedicated and loyal service he retired from the state of Louisiana. In his retirement, he began various business ventures as an entrepreneur. He enjoyed spending time with family and friends especially his children, grandchildren and also his beloved dogs in which he had a special passion.

In lieu of flowers the family suggests that donations may be made to St. Jude’s Children’s Research Hospital in honor of his grandson, Karson Sanchez who is a childhood cancer survivor.

To order memorial trees or send flowers to the family in memory of Jack Lott Jr. , please visit our flower store.