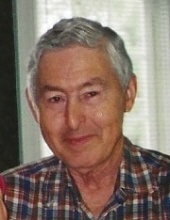 Mr. Frost was a longtime member of New Chapel Hill Baptist Church in West Monroe, LA. He graduated from Ouachita Parish High School and attended Louisiana Tech University. He was the Co-Owner of Frost Trailer Parts, Inc in West Monroe. He served in the United States Army after World War II stationed in Germany. James was known by his family as “Sonny”. He loved his family very much and was a giving person. He enjoyed seeing his great-great nephew, Drake and asked about him until the end.

The family would like to give special thanks to the West Monroe Guest House for their care of Sonny, to friends who visited, to Pastor Marty Black and the members of New Chapel Hill. Sonny talked about their visits often and they made him smile. The family would like to especially thank Pastor Black and his Sunday School Class that threw him the best 90th birthday party at the Guest House. He loved that more than you will ever know. And special thanks to Ascend Hospice for their very kind care until the end.

Memorials may be made to New Chapel Hill Baptist Church Cemetery Fund.

Psalm 116:15 “Precious in the sight of the Lord is the death of His Saints.”
To order memorial trees or send flowers to the family in memory of James Albert Frost, please visit our flower store.