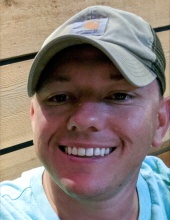 James Lee Benson, beloved husband, father, and friend, passed away in the arms of his loving wife on Friday, November 19, 2021, at their home in Eros, LA, after a courageous battle with cancer.

James was born on March 6, 1985, to Lynda Benson in Conway, AR. He attended Star City High School in Star City, AR, where he met the love of his life, Jessica June Benson (Daniels). They married and had two daughters, Faith LeeAnn Marie Benson (18) and Grace Nicole Benson (16), who he cherished.

James had a passion for racing and could often be found at Twin City Raceways both watching and running on TNT. But his true joy came from being with his family, which included his trusted sidekick, Beaux Harrison the basset hound. They were often found camping, fishing, and hunting together or spending time with their large family of friends. He had an infectious nature that drew people to him, and he will live on in the incredible memories he left with everyone that had the good fortune to know him.

James was a proud employee at Siemens Energy for six years as a field service representative. He had such a strong passion for his very warranted career. His career took him all over the world. James thoroughly enjoyed the guys he worked with. He had a self-taught masters electrician license. James had so many talents; there was not a task he could not handle. The determination he had was incomprehensible. He was truly one of a kind.

James is preceded in death by his stepdad, Jimmy Fowler, whose influence and guidance shaped the man he became.

He is survived by his wife, Jessica Benson and their daughters, Faith and Grace Benson; and his mother, Lynda Benson.

At James’ request, no services will be held.

In lieu of flowers, the family requests donations be made in James’ name to St. Jude Children’s Research Hospital or to Twin City Raceways.
To order memorial trees or send flowers to the family in memory of James Benson, please visit our flower store.