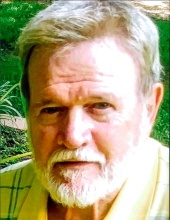 
“Night night buddy. I Love You” was the last message that was sent to his only daughter, Lisa McManus Naron before he passed away at Glenwood Regional Medical Center. James, Pawpaw, or Jamie as he was known, loved hunting, fishing, and the outdoors. He was such a jokester, loved the state of Missouri, and was the life of the party! He always talked about having Poker Night with the guys which he looked forward to every week. He was a lover of all animals, but his favorites being his outside cats and his squirrels. He was married to his wife JoAnn Bagwell McManus for 53 loving years. Between them, they had 2 children; daughter, Lisa and infant son Kenneth who is deceased. He worked for AL&M Railroad from which he retired after many years of service as an engineer.
James is preceded in death by his wife, JoAnn Bagwell McManus. Infant son, Kenneth Charles McManus. Father, Charles McManus Jr. Mother, Adeline Marie Mowrey. Brother, Charles “Chuck” McManus.
James is survived by his daughter, Lisa McManus Naron and husband Terry Naron. Granddaughter, Tara Naron Nielsen and husband Guthrie Nielsen. Great-Grandchildren, Dalton Nielsen, Gatlin Nielsen, & Lynnen Rose Nielsen
He was such a lovable man and he will sincerely be missed.
In honor of his wishes, there will be no memorial or funeral service. He will be placed in the Mausoleum next to his wife at Mulhearn Memorial Park Cemetery in Monroe.
In remembrance of him, he always quoted a song that he would sing to his daughter “Just A Rose Will Do”.

To order memorial trees or send flowers to the family in memory of James " Jamie" McManus, please visit our flower store.