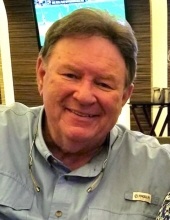 James Stephen Boyte, or as we all knew him, Steve, was born in Monroe, LA on September 7, 1947. Steve went to be with the Lord on September 17, 2021, in Sterlington, LA. Funeral services will be held at 3:00 P.M. Sunday, September 19, 2021, at North Monroe Baptist Church in Monroe, LA with Rev. Warren Eckhardt officiating. Interment will follow at Mulhearn Memorial Park Cemetery in Monroe, LA. Visitation will be held from 5:00 P.M. until 7:00 P.M. Saturday, September 18, 2021, at Mulhearn Funeral Home, 2308 Sterlington Rd., Monroe, LA.
Steve spent most of his 74 years in the Monroe area, other than his time serving in the US Navy. He graduated from Ouachita Parish High School in 1966, then began his military life in 1968 when he joined the U.S. Navy. He spent the next 4 years traveling the world and serving in the Pacific during the Vietnam War as a Petty Officer 3rd Class. His job was to spot the enemy submarines from the air as an air crewman on a P3 Orion. Steve returned from war in 1972, where he worked several jobs before returning to school to pursue his career as a nurse.
In 1982, Steve graduated from the College of Applied and Natural Science at LA Tech with an Associate Degree in Nursing. In 1994, he graduated from Grambling University with his bachelors in nursing, and in 1996 he received his Masters of Nursing degree from Mississippi University for Women. He spent the next 25 years serving the local and surrounding communities of NE Louisiana as a Family Nurse Practitioner until his retirement in 2016. Steve was a pioneer in the field being one of the first nurse practitioners in the state of LA when he began to practice.
Steve married the love of his life, Martha, in 1979. They were married for 42 years. They were blessed with two daughters, Staci and Kristi. Steve’s favorite past time was being with those he loved, camping with friends, and spoiling his four grandchildren. In his spare time, Steve enjoyed fishing, entertaining the kids as “Doc” the Shrine Clown, and sharing his musical talents at church and singing country music with the Southern Limits Band.
Steve was preceded in death by his father, James Boyte; mother, Dottie Boyte; aunt, Bea Greenan; Uncle, James Stewart; father-in-law, Charles Allen; and mothe-in-law, Dorothy Allen.
He is survived by his wife, Martha Boyte; daughters, Staci Choate (Kenneth), Kristi Ewasko (Matt); brother, Bob Boyte (Judy); sister, Becky Boyte (lifelong friend Robyn Nally); grandchildren, Avery and Henry Choate, Alex and Cameron Ewasko; brother-in-law, Richard Allen (Terri); niece, Ginger Coffey; as well as many other great nieces, great great niece and nephew, and cousins.
Pallbearers will be Kenneth Choate, Matthew Ewasko, Glen McAdams, Don Brant, Jodie Perry, Tommy Culp, and junior pallbearer, Alex Ewasko.
In lieu of flowers, memorials may be made to Travis Manion Foundation, or Tunnel to Towers foundation.
To order memorial trees or send flowers to the family in memory of James Stephen Boyte, please visit our flower store.