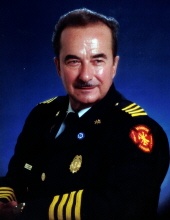 Mr. Renfrow graduated from Ouachita Parish High School in 1950 and from Northeast Louisiana University in 1961. He served his country through the U.S. Army 82nd airborne. He served the City of Monroe as Chief Communications Officer with the Monroe Fire Department for over 40 years and 10 years as the 911 supervisor. After retiring from the 911 center, he spent two years as a CDL driver hauling nitro.

Mr. Renfrow enjoyed weightlifting. He was a state champion and won 3rd Place in the National Senior’s Division. He enjoyed flying his Cessna as an instrument rated pilot and the highlight of his life was his trip to the Arctic Circle. Mr. Renfrow lived a long and adventurous life flying, sailing his sailboats, and riding his motorcycles. He was a member of the Lakeshore Barbell Club, the Chapter D Gold Wing Road Riders, Corvette Club, Twin City Ramblers and the Aeronuts.

Memorials may be made to Pilots for Patients or the local Monroe Fire Department.

A special thanks to the NE LA War Veterans Home for their loving care.