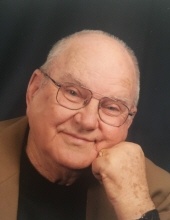 Jerry Melton, age 90, left his earthly home on March 6, 2022, to go to his heavenly home that had been prepared for him. Jerry, the son of Cranford and Rosanna Melton, was born in Winnfield, Louisiana, on August 8, 1931. Jerry attended elementary school in Minden, Louisiana and received his secondary education at Winnfield High School. After graduating from high school, Jerry attended Northeast College (NLU) and completed an Army tour of duty in Korea. Upon returning home from Korea, He met Virginia Sheppard who was his life - long partner for 66 years. Jerry and Virginia were married January 28, 1956, and made their home in Delhi, where Jerry was employed by L P & L (Entergy) in high line construction. Ten years later Jerry was transferred to Ferriday to work in a new high line construction group. After several years in Ferriday, Jerry was then transferred to West Monroe where he worked in sub-station construction. Jerry and Virginia have made their home in West Monroe for 45 years.

Jerry was a passionate baseball fan. As a young man he played in a semi-pro league in Winn Parish. In the late fifties, Jerry was actively involved in the organization of the Dixie Boys Baseball Program. During the first year of the program, he coached a team in Delhi that went on to win the first Dixie Boys World Series Title. That first year of the program, Dixie was only in Louisiana; however, the program soon expanded into 11 southern states. Jerry was actively involved in the Louisiana Program, serving as state President. Later he represented Louisiana on the National Dixie Board and was elected as President of the National Dixie Boys Programs, a position he served for a number of years.

For many years Jerry was a member of the Carl White Sunday School class at the First Baptist Church in West Monroe. As a result of attrition, the class was merged with the Clifton Tennison Class taught by Jerry’s good friend, Dr. Jerry Edmonson. When the members of that class were reduced in number, they elected to end the class and the Covid pandemic closed down all activities. When people were able to group again, the health of Jerry and Virginia had reached the point that they could not drive so much; therefore, they decided to attend Highland Baptist Church near their home. There, they were blessed by the great Bible teachings by Brother Skip Dean, who has been their spiritual support throughout the time of Jerry’s illness.

After retiring from Entergy, Jerry and Virginia enjoyed traveling in their motor home as well as making several European trips.

Jerry left behind to cherish his memories his wife, Virginia Melton; his brothers, Wayne Melton and wife, Glenda of Winnfield, LA and Roy Melton of Bessemer, AL; his nieces, Cathy Melton Crawford and husband, Michael of Hueytown, AL and Stephanie Melton of Bessemer, AL; his nephew, Shawn Melton and wife, Shannon, and their children Samantha, Logan, Hallie, Joshua, and Abigail of Montgomery, AL; and a special friend, Bruce Monroe and wife, Darla who he loved like a son.

Jerry was preceded in death by his parents, Cranford and Rosanna Melton; an infant brother; a sister-in-law, Lynn Jones Melton of Bessemer, AL, and his parents-in-law, Buck Sheppard and Laura Long Sheppard of Delhi, LA.

His wife wishes to express her thanks to the staff at the Guest House whose kindness and attention were so deeply appreciated and to the Elara Hospice team who made Jerry comfortable in his last days. Virginia wants to especially thank Brother Skip Dean who was there for her when she needed him with his kind spiritual support. Also, Mr. Johnnie Hoychicks’s spiritual support always came when it was most needed. Bruce Monroe was a rock of support throughout Jerry’s illness. Finally, Virginia would like to thank her friends, Gloria Camp and Mary Sue Mitchell who walked with her and held her hand throughout her time and grief and heartache.

Memorial Graveside Services will be held at the Melton Family Cemetery in Winnfield, LA, on March 26, 2022, under the direction of Mulhearn Funeral Home, West Monroe.

The good man brings good things out of the good that is stored up in him. (Matt. 12:25)
To order memorial trees or send flowers to the family in memory of Jerry Melton, please visit our flower store.