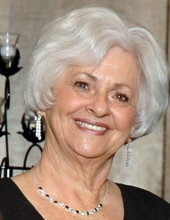 Funeral service for Mrs. JoAnne Cupples Kennedy, 82, of Monroe, LA, will be held at 1:00PM Friday, July 29, 2022, at Swartz First Baptist Church with Rev. Jeff Smart officiating. Interment will follow in Chatham Cemetery under the direction of Mulhearn Funeral Home Sterlington Rd. Monroe. Visitation will be from 11:00AM until service time at Swartz First Baptist Church.

JoAnne Cupples Kennedy was born January 1, 1940, in New Orleans, LA, and walked into the arms of Jesus on Monday July 25, 2022. JoAnne married the love of her life Fred Ray Kennedy and was married 46 years until his death in 2004. They had three sons and one daughter together which was the biggest blessing in their life. In the years that came she was blessed with seven grandchildren and one great granddaughter. She loved a family gathering and cherished spending quality time together. There never was a time where she wasn’t well kept and dressed. Some of her favorite hobbies were shopping, decorating, reading, and most of all talking with family and friends. In her early years, she was a substitute teacher in Ouachita Parish Schools and sold insurance with American General.

After retirement, she was a full-time volunteer at Swartz First Baptist Church which included, Hostess Committee, Building and Grounds Committee, Pastor Search Committees and many other rolls. She would always say, she wasn’t working for a paycheck, she only worked for the Lord. Sharing her faith and belief in God was her number one priority and she never wavered through all the hard times in her life. One of the most rewarding times of her life was teaching Sunday School to her group of ladies which became her family.

Memorials may be made to Swartz First Baptist Church or to St. Jude’s Children’s Research Hospital.


To order memorial trees or send flowers to the family in memory of JoAnne Cupples Kennedy, please visit our flower store.