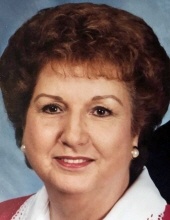 Joe Ann was born June 17, 1935, in Sicily Island, LA, and passed away August 31, 2021, at her home in West Monroe, LA. She graduated in 1953 from Ouachita Parish High School. She was a member of the choir, Glee Club, and the girls’ basketball team where they emerged as the 1953 AA State Champions of Louisiana. Joe Ann was a member at First West and was in the Agape Class.

She was preceded in death by her parents, Jesse and Evia Whitlock; her husband, Sam Brinson; her son, Alan Brinson; grandson, Christopher Collins; and brother, Vernon Whitlock.

Many thanks to STAT Home Health and St. Joseph’s Hospice. The nurses and all staff have been amazing and very kind.

And lastly, a heartfelt thanks to Angela Roberson, Tiffany Harrison, Shela Austin, and Evelyn Gammile for your unwavering kindness and help.
To order memorial trees or send flowers to the family in memory of Joe Ann Brinson, please visit our flower store.