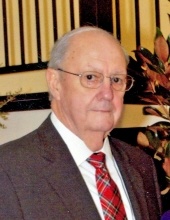 Joe E. Stewart, 86, of Ruston, LA, passed away on January 3, 2022. Joe was a lifelong resident of North Louisiana and was retired from The National Cash Register Company. He was born in Ruston on July 21, 1935.

Visitation will be at Mulhearn Funeral Home in West Monroe on Friday, January 7, 2022, from 5:00 P.M. until 7:00 P.M. Funeral services will be held on Saturday, January 8, 2022, at 10:30 A.M. in the funeral home chapel with Reverend R. C. Smith officiating. Interment will follow at Mulhearn Memorial Park Cemetery in Monroe.

Joe was a member of the Masonic Lodge #24 and First Baptist Church of Chatham. He was also a proud veteran of the U.S. Marine Corps. He was an avid outdoorsman and enjoyed nothing more than being on the water fishing or in the woods hunting. He was a true sportsman and cherished the times he spent with his friends at the camp or in a boat more than the hunt itself. Joe also loved to travel with his wife, Myra, and was especially interested in military history. He was an excellent storyteller and would keep you enthralled with the tales he could tell.

He is preceded in death by his parents, E. C. and Frances Tarver Stewart, and his dear friend and neighbor, Mr. E. L. Joyner.

The family would like to extend their gratitude to the wonderful doctors, nurses, and caregivers who have attended to Joe over the years with a special thanks to Dr. George Smith and Phillip Neville.

Memorials may be sent to St. Jude Children’s Research Hospital or the Shriners Hospital for Children.