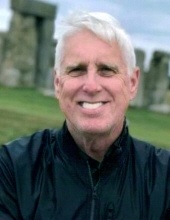 Memorial Services for John Andrew Newbold, 64, of West Monroe, LA, will be held at 3:00PM, Friday, February 25, 2022 in the chapel of Christ Church in West Monroe, LA under the direction of Mulhearn Funeral Home, West Monroe. Visitation will be held from 2:00PM until service time on Friday.
John was born in Parry Sound, Ontario, Canada on February 25, 1957 and passed away on February 15, 2022 in Monroe, LA. Most of his career was spent as a delivery driver for Wonder Bread in the good ol’ days and Coca-Cola in the later years. He also proudly served his community as a reserve deputy for the Ouachita Parish Sheriff’s Office. He loved activities such as basketball, snow skiing and giving his best effort to Xbox Live gaming. John also enjoyed being an unofficial food critic to the area and throughout his travels. Although he measured in at 6 foot 8 ¼ inches tall, and he made sure the quarter inch was represented, it was his personality that made him larger than life. He brought much laughter and joy to all those people he met. Out of his life experiences, what brought him most joy was his family.
He was preceded in death by his parents; Walter and Marjorie Newbold.
Survivors include his children, David Newbold and wife Leslie, Briana Stockett and husband Seth and Deanna Smith; 9 grandchildren, Casey, Dallas, Ariana, Cali, Hayden, Jace, Tanner, Abby and Shelby; sister, Janet Rhodes; brother, Roger Newbold; and numerous nieces, nephews and cousins abroad.
Online Registry/Condolences: www.mulhearnfuneralhome.com
To order memorial trees or send flowers to the family in memory of John Andrew Newbold, please visit our flower store.