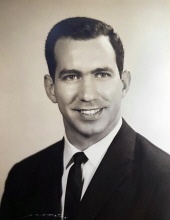 A Mass of Christian Burial for Mr. Joseph Dominic “J.D.” Cascio, Jr., 86, of Monroe, LA, will be 10:00 AM Monday, June 6, 2022, at Jesus the Good Shepherd Catholic Church, with Fr. Joseph Ampatt officiating. Interment will follow at St. Matthew Catholic Cemetery.

J.D. was born February 16, 1936 and passed away June 2, 2022. He graduated from St. Matthew High School in 1954 and went on to attend Northeast Louisiana State College. After graduating, J.D. joined the U.S. Army and served in active peace time duty as a commissioned officer with the Medical Service Corps from 1959-1961. His next adventure brought him to Tulane University Law School in New Orleans where he eventually met the love of his life, Patricia Ruth Hollier. After graduating from law school in 1964, he returned to Monroe and began a distinguished 40 plus year career as an attorney. J.D. and Pat were married on February 8, 1964 and lived in Monroe where they raised their four children.

The only thing J.D. loved more than learning a new skill was his quest to purchase every possible tool available for the task. If he found a painting he liked, he enrolled in art lessons. He enjoyed the farmer’s market so much that he bought a tractor and planted a community garden. Golf seemed fun so it made sense to join Bayou DeSiard Country Club. He found plans for Shadows-on-the-Teche, a home in New Iberia, and decided to build a miniature replica for his daughter’s dollhouse. He took every opportunity to take his boat, The Six Pack, fishing in the Vermillion Bay or his sons duck hunting at Black Bayou or in the marshes of south Louisiana. Also, as someone who always enjoyed a good practical joke, he wasn’t above having an outhouse or donkey delivered to a friend’s front yard.

In an effort to preserve generations of family recipes (Spatafora olives, cucidatas, his mother’s stuffed artichokes, Pat’s spaghetti and meatballs, Marie Hollier’s rice dressing and crawfish stew), he began work on the first edition of the Cascio family cookbook, You Know My Sifter. He chose this name because his mother-in-law famously told him to measure seven sifters of flour to make her biscuits. When he asked how much that was, she replied, “oh, you know my sifter.”

He always found a loving way to pass along his beliefs in hopes of leading others to Christ. He particularly enjoyed working with the St. Vincent de Paul Society serving the needy of the community. J.D. was a member of Jesus the Good Shepherd Catholic Church. He was a disciple of Christ which was evident by his devotion in service to others.

J.D. retired in 2007 from Hayes, Harkey, Smith & Cascio as a proud partner in the firm and went on to work part-time at the Ouachita Parish DA’s Office.

He is preceded in death by parents, Joseph Dominic Cascio, Sr. and Rose Spatafora Cascio.

The family would like to extend a special thank you to Terry Lynch for her many years of compassionate care.

Memorials may be made to St. Vincent De Paul or Dementia Society of America.

To order memorial trees or send flowers to the family in memory of Joseph Dominic Cascio, Jr., please visit our flower store.