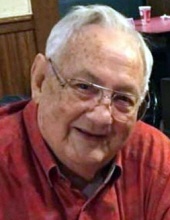 Funeral services for Kenneth C. Wagley, Sr., 85, of Monroe, LA will be held at 11:00am on Wednesday, June 8, 2022, at the chapel of Mulhearn Funeral Home, Sterlington Road, Monroe, LA with Dr. Mark Fenn and Rev. Charles Martindale officiating. Visitation will precede the services. Interment will follow at Northeast Louisiana Veterans Cemetery, Rayville, LA.

Ken never met a stranger; he took pride in introducing people to each other and especially to God. Over his business career and throughout his life, he had many adventures. His time as a Corporal in the US Marine Corps set him up to serve as the business manager for the Miss Louisiana Pageant, a member of the Monroe Jaycees, Rotary International and Barak Shriner’s Temple, and as a former player and unofficial ticket seller for Northeast Louisiana University (ULM) football team.

Throughout the fall, he could be found either hunting with one or more of his beloved dogs or sitting in Malone Stadium Section D surrounded by friends and fellow football fans. As a life insurance agent, Ken was the first person in the state of Louisiana to reach 25 consecutive years as member of the Million Dollar Roundtable.

As a Christian, Ken introduced many people to Jesus. Teaching others about God was a priority for him. He was dedicated to the Lord and served as deacon at First Baptist Church West Monroe and North Monroe Baptist Church. He started the Nearly/Newly Married Sunday School class and served as a Lay Revival Leader. Sharing God’s word thru bibles to those in need and ensuring children at Louisiana Baptist Children’s Home were supported and loved was especially important to him.

After the absolute love of his life, Diane, Ken loved his family, dogs, and friends. Whether it was hunting squirrels, rabbits, hogs, ducks, or birds, there was always a dog by his side. Being a good shot himself, he also enjoyed going to the rifle range and shooting with others. On occasions, he would pick up a pole or two and go fishing. Mostly, he enjoyed spending time outdoors on any activity that gave him an opportunity to spend time with his family or introduce someone to the joys found in Louisiana the Sportsman’s Paradise.

In lieu of flowers, the family requests that donations be made to Louisiana Baptist Children’s Home, Samaritan’s Purse, or Ouachita Parish Public Rifle Range.


To order memorial trees or send flowers to the family in memory of Kenneth Carter Wagley Sr, please visit our flower store.