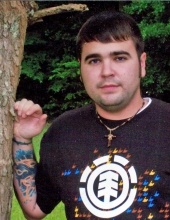 Kenny Lee Olson was born on June 22, 1981, in West Monroe, LA and passed away on July 30, 2022. Kenny never met a stranger and welcomed everyone into his life. He will always be remembered by his great smile. He loved spending time with his daughter, Kenley. He enjoyed riding motorcycles and collecting RC cars. Kenny was a graduate of West Monroe High School.

Memorials may be made to Fresh Start Ministry.
To order memorial trees or send flowers to the family in memory of Kenny Olson, please visit our flower store.