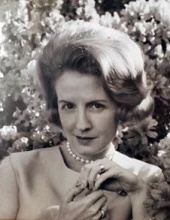 Lee Slagle Pierson passed away peacefully at her home on November 2, 2021.

Lee was born in Monroe, Louisiana, on December 22, 1926, to Elmer Cuthbert Slagle and Anna Wooten Slagle. As a child, she grew up on South Grand near the Masur Museum which her grandfather built.
She enjoyed summers at Camp Waldemar in Hunt, Texas, and excelled in horseback riding and tennis.

After graduating Valedictorian from Ouachita Parish High School, Lee attended Newcomb College in New Orleans where she pledged Chi Omega sorority. She later transferred to Louisiana State University in Baton Rouge. While attending LSU, she met and married Robert Hunter Pierson. The couple moved to Alexandria where she gave birth to 8 children.

Lee deeply loved the arts and literature. A beautiful and talented woman, Lee graced the stage as the lead role in several productions at the Alexandria theatre including, “The Glass Menagerie”, “Carousel”, and “Hansel and Gretel”. Her children helped her learn and practice her music for each of these roles. As a young wife and mother, Lee attended Louisiana College in Pineville, where she earned her Master’s degree.

After the death of her husband, Lee returned to Monroe, where her mother, sister Clarice Johns, and daughter Anne Pierson Patten, welcomed her with open arms. She taught English at Woodlawn Junior High School and then later taught at West Ouachita High School. She was adored by her students, and always welcomed the opportunity to visit with present and former students who enjoyed her stories of the glamorous life on stage, her views on the latest fashion, and her majestic sense of style. She loved sharing scripture and often said she was good friends with the Holy Spirit. Her children called her “My Mama,” and to her grandchildren she was affectionately known as Big Lee.

A graveside service will be held Tuesday, November 9, 2021. A memorial service celebrating Lee’s life will follow at Covenant Presbyterian in Monroe, LA at 11:00 A.M.

The family would like to express their sincere appreciation to her caregivers who loved her as family: Flesa (Lesa) James, Angel Kelly, Charlene Kelly, Rosa Williams, Charlotte Hubbard, Brenda Joyce Woods, and our friends from St. Joseph Hospice.

In lieu of flowers, memorials may be made to Covenant Presbyterian Church or the Strauss Little Theatre of Monroe.

“Photo by Sir Cecil Beaton”
To order memorial trees or send flowers to the family in memory of Lee Slagle Pierson, please visit our flower store.