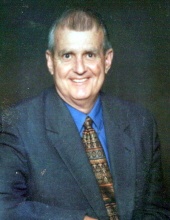 Lloyd C. Gill Jr. went Home to be with his Lord and Savior, Jesus Christ, on August 26, 2022, surrounded by his family. Lloyd wore many hats during his lifetime andwas affectionately known as “Daddy”, “Pappaw”, “Lloyd Clifton”, “Jack”, “Uncle Jack”, and “Toodnah”.

He was born on August 9, 1934, in Alto, Louisiana, to LloydC. Gill, Sr. and Mary Allyne O’Neal Gill. He grew up in the Fairbanks community. He graduated from Ouachita Parish High School and Northeast Louisiana University (ULM). He worked in the oil and gas industry until his retirement in 1999.

Lloyd served in the U. S. Army. For many years, he coached little league baseball, youth basketball, and youth football. He was a fan of the Neville Tigers, OCS Eagles and ULM Warhawks. He was a long time member of Covenant Presbyterian Church serving as an Elder and singing in the choir (always promising a solo on Sunday morning). In his retirement years, he volunteered with the Ouachita Parish Sheriff’s Senior Patrol. He was a “steadfast” in so many lives and he will be dearly missed!

We would like to thank the doctors, nurses and staff who took such wonderful care of him at the NE Louisiana Veterans Home and Heart of Hospice.

Visitation will be at Mulhearn’s Funeral Home on Hwy. 165 in Monroe on Sunday, August 28, from 4:00 - 6:00 p.m. Funeral services will be held at Covenant Presbyterian Church, 1901 Milton Street, Monroe, Louisiana, on Monday, August 29,at 11:00 a.m. with Pastor John Mabry and Pastor Bruce Rux officiating. Burial will be in the Sibley Cemetery.

To order memorial trees or send flowers to the family in memory of Lloyd Clifton Gill Jr., please visit our flower store.