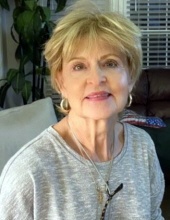 Memorial services for Mrs. Marilyn Farmer Landry, 75, of Monroe, LA, will be held at 10:00AM Friday, July 29, 2022, at Our Lady of Fatima Catholic Church with Rev. John Paul Crispin officiating under the direction of Mulhearn Funeral Home Sterlington Rd. Monroe. Visitation will be from 5:00PM until 7:00PM Sunday, July 24, 2022, at Mulhearn Funeral Home.
Mrs. Landry was born on January 26, 1947, in Manchester, New Hampshire to William Byron Farmer and Alice Regina Farmer. She was preceded in death by her husband of fifty years, Ronald Louis Landry, who passed away on April 18, 2019. Mrs. Landry also had two brothers who preceded her in death, her older brother William Farmer, Jr. who passed away in 2013 and her younger brother John Farmer, who died in August of 1993.
Marilyn is survived by her two sons, Sean Thomas Landry and Ronald Louis Landry, Jr.; stepdaughter, Connie Landry Nagim, as well as her grandson Kolton Landry.
Marilyn’s father served in the Air Force, so she moved quite frequently as a child, spending time in Lisbon, Portugal, Denver, Colorado, and Harlingen, Texas before her family settled in Choudrant, Louisiana.
Marilyn graduated from Ruston High School in 1965, and then attended Louisiana Tech University graduating with a degree in Sociology and a 4.0 GPA. While at Tech she was named Who’s Who Among Students in American Universities and Colleges. While there she was also a member of the Newman Club, Phi Kappa Phi, Alpha Tau Delta, and she served on the board of directors at the Student Center and was a secretary of the Union Board.
Marilyn and Ron Settled in Monroe, Louisiana and Marilyn worked for St. Francis as a pastoral minister and then at St. Joseph’s Nursing Home in the same capacity. She was a member of Our Lady of Fatima Catholic Church and served as a Eucharistic Minister for many years. She was a life-long lover of Tennis and was a very active in the Ouachita Women’s Tennis organization. Her favorite memories are of her times spent on trips with and playing tennis with her friends.
She passed peacefully while surrounded by friends and loved ones. The family asks that in lieu of flowers, if anyone desires, they can make a charitable contribution to M.D. Anderson.
Online Registry/Condolences: www.mulhearnfuneralhome.com
Mulhearn Funeral Home
Sterlington Road
Monroe, LA

To order memorial trees or send flowers to the family in memory of Marilyn Farmer Landry , please visit our flower store.

Our Lady of Fatima Catholic Church