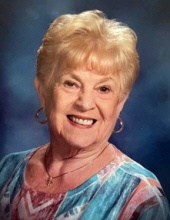 A celebration of the life of Marilyn Jean Huntsman Soignier of West Monroe, Louisiana will be held at 10:00 AM, Friday, July 16, 2021, at Mulhearn Funeral Home in West Monroe. Interment will follow in St. Paschal Catholic Cemetery
Visitation will be from 4:00 PM to 7:00 PM on Thursday at the funeral home.

Marilyn was born on January 2, 1939, in Stuttgart, Ark. to Marion Ellis Huntsman and Dorothy Newton Huntsman, both of Stuttgart, and passed away from a brief illness at St. Francis Medical Center on July 13, 2021.

Although her life began in Stuttgart, her mom and dad moved to West Monroe in 1950 with Marilyn and her younger siblings. She met the love of her life and husband of 62 years, Richard Lee Soignier, on the school bus in 1955.

After graduating from West Monroe High School in 1956, Marilyn went to work at Southern Tool, Inc., where she served as Vice President of Operations for more than 40 years until her retirement in 2000.

Marilyn enjoyed spending as much time with family, which would grow to include three children, 10 grandchildren and 17 great grandchildren. She and Richard could always be counted on to attend every ballgame, awards ceremony, and dance recital a grandchild or great grandchild participated in.

She belonged to several organizations including Epsilon Sigma Alpha Sorority, Septieme Book Club, Highland Garden Club, Black Hat Society and an original member of the Board of Directors for the Boys & Girls Clubs of North Louisiana, where she served for 40 years.

Her love for serving her community and her family was only outmatched by her love for Jesus and her church. She was a lifelong member of Community of Christ, where she served as a minister and pianist.
In addition to embracing Jesus, Marilyn was welcomed to her eternal home by her parents, Marion and Dorothy, her brothers Johnny and Freddie, her mother and father-in-law Adricole and Adile Soignier and her oldest great grandson Sawyer Vige.

Honorary pallbearers will be the former employees of Southern Tool, Inc., where she was fondly known as “Mom”.

The family would like to extend its deepest appreciation to the many friends, neighbors and family for the meals, kind words and prayers. Memorials can be made to the Boys & Girls Clubs of North Louisiana, PO Box 1769, West Monroe, LA 71294.
To order memorial trees or send flowers to the family in memory of Marilyn Jean Huntsman Soignier, please visit our flower store.