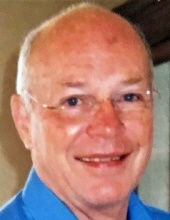 On January 6, 2022, Nett Stidham left his earthly body behind to be welcomed into heaven. He is in the presence of the Lord, surrounded by his love.

Nett had a good, long life. It all began in western Oklahoma, in the small town of Taloga. He loved playing in the creeks, fishing and camping with his friends and hunting the abundant wildlife. He also was a hard worker, assisting his father with herding and tending the cattle that they raised on their ranch. He enjoyed being a boy scout and later in life, he was a scout leader.

Nett was a studious boy, and it came as no surprise that he was Valedictorian of his high school class. To expand his knowledge, he attended Oklahoma Agricultural Mechanical College (now OSU). While there, he received a degree in Ag Econ along with meeting the first love of his life, Bessie Waters. He later returned to OAMC to get a degree in Chemical Engineering that led to a successful career in the chemical industry.

Nett and his first wife, Bessie, enjoyed 62 years. Together they produced a loving family of 3 children, 6 grandchildren and 4 great-grandchildren.

Nett had a strong Christian faith and enjoyed serving God and his church in various capacities. Over the years he was a deacon, worked with the Gideons in distributing Bibles, and he especially loved to sing in the choir.

You could always find Nett whistling a tune. He got his love of music from his mother, as well as the joy of dancing. He had a love for life and being able to travel opened up many opportunities for him to meet and get to know people. There were no strangers in his life... just people he had not talked to yet.

Nett met Carol Bonner late in life and while they were a couple for only two years, they made the most of their time together. There was traveling, exploring new places together and, of course, dancing.

A memorial service celebrating Nett’s life will be held at 2:00 P.M., Saturday, February 19, 2022, at North Monroe Baptist Church with Rev. Warren Eckhardt officiating. Visitation will be held from 1:00 P.M. until time of service at the church.