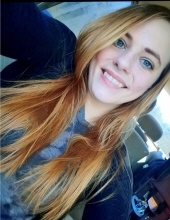 Rachael Galligan was born January 8, 1993 and passed away April 7, 2021. She loved her sons, Avery and Carson and was a great mother to them. Rachael was also a great sister and aunt.

In lieu of flowers, the family asks that memorial contributions be made to the account of Avery Chandler Hands at Ouachita Valley Federal Credit Union that has been set up to help with Rachael’s two sons’ future expenses.
To order memorial trees or send flowers to the family in memory of Rachael Galligan, please visit our flower store.