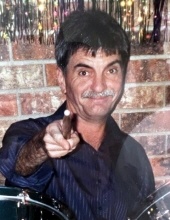 Mr. Ross was born January 10, 1952 and passed away on January 15, 2022. He was of the catholic faith. Randy was an entertainer. He was a professional drummer who played at numerous events: Dynasty, Flamingo, Country Classic, GG Shin Club, Red Coach Inn, Saddle & Spurs, Enoch’s and many more.

He is preceded in death by his parents, Thomas and Dorothy Ross, Sr; sister, Roberta Johnson; brother, Thomas Ross, Jr; sister-in-law, Joyce Ross; and the love of his life, Rhonda Bates.

Visitation will be from 12:00 PM until 2:00 PM Saturday, January 22, 2022, at Mulhearn Funeral Home, Monroe.
To order memorial trees or send flowers to the family in memory of Randolph "Randy" Ross, please visit our flower store.