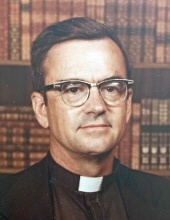 Funeral Services celebrating the life of Rev. Edwin C. Webster, 96, of West Monroe, LA will be held at 11:00 A.M. Monday, July 11, 2022, at the Grace Episcopal Church in Monroe, LA with Rev. Don Smith and Deacon Bette Kauffman officiating. Visitation will be held from 10:00 A.M. until Service Time in the Kilbourne Hall at Grace Episcopal Church on Monday.

Rev. Webster was born on November 29, 1925, in Fond du Loc, WI and passed away on June 28, 2022, in West Monroe, LA. He was a veteran of the United States Army serving in WWII. After his service in the military, he worked with the California Conservation Commission, fighting forest fires in California. In 1953 Rev. Webster entered the mission field and moved to the Republic of Panama. Rev. Webster was a very educated man. He received his Bachelor’s Degree in Finance, had his Theology Degree from the Nashotah House of Theological Seminary in Nashota, WI and received his Master’s degree in history. While in Panama, one of his hobbies was researching Sir Frances Drake, where he was noted for his discoveries that he made while in Panama. Rev. Webster is preceded in death by his 7 siblings.

In lieu of flowers, memorials may be made to the Grace Episcopal Church in Monroe, LA.

To order memorial trees or send flowers to the family in memory of Rev. Edwin C. Webster, please visit our flower store.