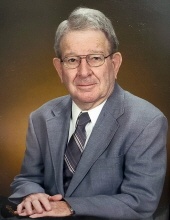 Robert S. Green, 89, was born in Crossett, Arkansas, on September 19, 1932. He grew up in Crossett and graduated from The University of Arkansas with a degree in mechanical engineering. Bobby served in the Army from 1956-1959, then returned to Crossett where he worked for Olin Kraft in Monroe, LA. He met and married Jean Toler, and they moved to Monroe and had 2 daughters, Shannon and Sarah. Bob worked as an engineer for several companies, including Olin Kraft, Enesco in El Dorado, AR, and Potlatch Corp in McGehee, AR (through Johnson Engineering). Bob was licensed to practice engineering in 6 states.
Bob was a longtime member of St Paul's United Methodist Church in Monroe. He lived a quiet life and was always ready to help his friends, neighbors, or strangers with any project or repair job. He never passed a broken-down car on the side of the road without stopping to help. Bob had a large family and enjoyed history of Arkansas and his own family history very much, completing a family history set of stories last year. He was known to be a man of integrity and kindness. He considered all men equal and respected hard work and creativity. Bob was a lifelong learner, enjoying math and always pursuing knowledge to better understand how things worked around him. One of Bob's dominant life philosophies was "don't panic". He reminded us to "be patient" and "take the time you need to complete the job well". Bob was also known for his colorful "south Arkansas" descriptors of behavior, such as "mogating", "mullygrubbing", "drag-assing", and "ashtray-throwing mad".

Bob is preceded in death by his wife, Jean Toler Green, and daughter, Shannon Green Scharf. Bob is survived by his daughter, Sarah (Tracy); grandchildren, Nicholas Scharf, Cabe Kelly Wyatt, Ellie Kate Wyatt, Toler Wyatt; his dear friend and neighbor, Lula Tolar; and nephew, Keith Fleming and his wife, Cindy, of San Antonio, TX. Special thanks to Bob's longtime physician, Dean Stockstill, and all the doctors and nurses who cared for him through these past years.

Memorials can be made to St Paul's United Methodist Church.

To order memorial trees or send flowers to the family in memory of Robert Stephens Green, please visit our flower store.