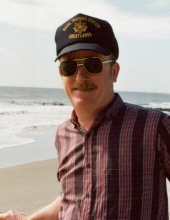 Funeral services celebrating the life of Roger Wayne “Bucky” McEacharn will be at 10:00 a.m. on Monday, July 12, 2021, at Mulhearn’s in West Monroe. A visitation with the family will be held from 4:00 p.m. to 7:00 p.m. on Sunday, July 11, 2021. Pastor Ricky Baker will officiate the service. Interment will follow at Memorial Park Cemetery in Monroe under the direction of Mulhearn Funeral Home, West Monroe.

Roger Wayne McEacharn, known as “Bucky”, by his closest family and friends, passed from this earthly home on July 9, 2021, at the age of 76 after a lengthy illness.

Bucky was born in Monroe, Louisiana, but lived most of his life in West Monroe. He attended Crosley Elementary School and West Monroe High School. In 1965, he joined the United States Air Force but never left the continental U.S., spending his service time at Charleston AFB in South Carolina. After his service in the Air Force, he then continued to work with the Air Force as a civilian where he spent time living in Vietnam and then working around the country including Nevada, Montana and Alaska. He returned home to West Monroe to raise his two children (Pete and Polly) from a previous marriage. He was a machinist by trade and could run a lathe and mill a shaft without the use of a computer. Throughout his life in West Monroe, he worked for Westinghouse, Southern Tool and Custom Machine Works.

On July 6, 1979, he married the love of his life, Elizabeth Michelle Jackson. They had one child together, Jason, who has been instrumental in helping Michelle take care of his dad over the final years of his life. In 2009, they informally ‘adopted’ their granddaughter, Victoria McEacharn, who brought energy and vivaciousness to their lives each and every day. Victoria was her Papaw’s princess in every sense of the word. Then, in 2013, Jason brought a grandson, Elliot, into their lives. Papaw and Elliot were “Besties” and Elliot will always be “Papaw’s Partner”.

Bucky and Michelle made a life together for 42 years. He pushed her to pursue her education and worked hard to support his family so that she could do that. As she completed her education and began her career at ULM, he retired and then supported her at every stage of her career…manning the grill for various cookouts she would organize, pitching in to set up and take down conference equipment as she took on yet another service role, and listening to her recruiting pitches over and over and over. While he never actually worked for ULM, he became a part of the university family with Michelle.

Michelle’s family also became Bucky’s family. He felt the same love for her mother as she did. Her brother and sisters became his brother and sisters. For many years, he served as the patriarch of the family, often sought out for advice and support by her family.

Bucky was preceded in death by his parents, Aubrey and Pauline McEacharn; his mother-in-law and mom in heart, Flora McPhearson Harper; and his brother-in-law and buddy, Joey Fletcher.

He leaves behind his wife, Michelle; their son, Jason; his granddaughter, Victoria; and his grandson, Elliot. Other immediate surviving members of his family include his brother (Danny), his son (Pete) and Pete’s other children (Amber, Alexis and Jacob), and his daughter (Polly) and her children. From Michelle’s family, he leaves behind her siblings (Cyndi Fletcher, Richard Jackson, and Tessa Towers) and several nieces and nephews (Josh, Paige, Bailey, Brittany, Hannah, Jaylen, Jack, Cady, and Alaina), and Elliot’s mother (Alicia DeLong).

The family is eternally grateful to Louisiana Hospice & Palliative Care and all of the angels in the form of people who helped Bucky and Michelle over the past three and half years, including the nurses (especially Brandi, Amy, Apryl, and Candi), therapists, caregivers (especially Mona and Pam), Pastor Ricky Baker, and other family and friends who are too numerous to mention.

In lieu of flowers, the family encourages you to make a donation to Discovering Downs with NELA, MedCamps of Louisiana, Grace Baptist Church, the ULM Foundation Patricia G. Roshto Memorial Scholarship Fund or other charity of your choice.