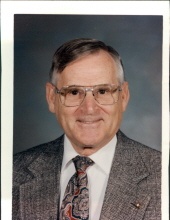 Reverend Russell M. Noss was born on May 7, 1925, in Elkhart, IN, to Dorsey L. Noss, Sr., and Laura J. Noss. He went to his eternal reward on February 9, 2022, in Monroe, La, at the age of 96 years, 9 months, and 2 days. One of his lifelong goals was to be the longest living Noss, which he exceeded by 2 months and 26 days.
Russell was a World War II veteran having enlisted in the United States Army immediately upon completion of High School. He fought in the European theater. While fighting in Germany, he was shot by enemy fire, subsequently being awarded a Purple Heart.
Upon returning home and leaving military service, he began studying to become an architect, but God had a better plan. Feeling the call of God to enter fulltime Pastoral ministry, he enrolled at Pacific Bible College in Portland, Oregon. It was there that he met and married the second love of his life, Ethel Lou Yetzke on June 5, 1949. His first love was always his Lord and Savior Jesus Christ; Ethel would have it no other way. Their marriage was based on Matthew 6:33, “Seek ye first the Kingdom of God, and all these things will be added unto you.” While in college, Russell and Ethel were blessed with two daughters, Rebecca Ethel (Becky) and Ronda Sue.
Upon graduating with a Bachelor’s Degree in Pastoral Studies, the young couple accepted their first pastorate in Benedict, North Dakota in 1953. He was ordained on June 26, 1955. While there, they were blessed with their third daughter, Renee’ Marie, completing their family. His proudest self-proclaimed title was “Dorm Daddy in a Sorority House.”
Reverend and Mrs. Noss’s 66+ years of ministry also took them to Prichett, CO; Dacoma, OK; Midwest City, OK; Oak grove, LA; Decatur, IN; and Oklahoma City, OK. They also spent time on the mission field serving as interim pastors in Guatemala, Costa Rica, and Argentina while the assigned missionaries returned to the United States on furlough. Loving to travel, they visited all 50 states, as well as numerous countries around the world.
Reverend Noss was preceded in death by his parents and siblings, his wife, Ethel Lou; second wife, Sylvia Schroeder Noss; daughter, Becky Upchurch; and son-inlaw, Tom England.
He is survived by 2 daughters; Ronda Sue Tipton (Tim) of Broken Arrow, OK; and Renee’ Marie Galyean (Kenny) of Monroe, LA. 8 grandchildren: Michael Upchurch (Gina), David Upchurch (Andrea), Brian England (Amy), Martin England (Sarah), Tracey Galyean Adcock(Nolan), Russell Wayne Galyean, Traci Tipton-Call (Ben), and Trent Tipton. 19 great grandchildren and 1 great, great grandchild.
Online Registry/Condolences:www.mulhearnfuneralhome.com


Online Registry/Condolences:www.mulhearnfuneralhome.com
To order memorial trees or send flowers to the family in memory of Russell Mandis Noss, please visit our flower store.