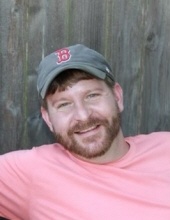 Funeral services celebrating the life of Sammy Ray (Sam) McCain, 37, of West Monroe, LA, will be held at 11:00 AM Wednesday February 9, 2022, in the chapel of Mulhearn Funeral Home in West Monroe, LA, with Rev. Waymond Warren officiating. Interment will follow at Zoar Cemetery near Chatham, LA.

Sam died February 3, 2022, at his residence after a sudden illness.

Sam enjoyed the outdoors, hunting and fishing, but his most favorite time was just hanging out with his daughter, Zoie. Sam was employed with his father at McCain Farms for many years and most recently was in the meat department at Mac’s Fresh Market in Monroe.

He was preceded in death by his grandparents, Bud and Jackie McCain and Sam and Flo Fordham.

Visitation will be from 5:00 PM until 7:00 PM Tuesday at Mulhearn Funeral Home in West Monroe.

Memorials may be made to the charity of your choice.

Online Registry/Condolences: www.mulhearnfuneralhome.com
To order memorial trees or send flowers to the family in memory of Sam McCain, please visit our flower store.