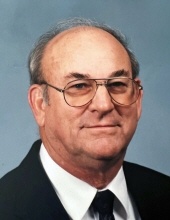 Mr. Putnam died July 29, 2022, after a lengthy illness surrounded by his loving family.

Mr. Putnam was a longtime member of First United Methodist Church in West Monroe, where he was a member of the choir and served on numerous administrative committees of the church. He and his children were owners of Jabar Corporation. He was a graduate of Texas A&I at Kingsville, now Texas A&M, where he was president of the student council, captain of the football team (1954-55), and a member of the ROTC. After college, he served in the Army as a Second Lieutenant, and then served in the U.S. Army Reserves for eight years. He was also a very active member in Dixie Youth Baseball.

He was preceded in death by his parents, Royal and Abby Putnam; his daughter, Angylyn Bagley, and four brothers and a sister.

Survivors include his wife of 66 years, Mrs. Betty Lott Putnam; Sons and daughters-in-law, John and Patricia Putnam, David and Ramona Putnam, Randy and Sylvia Putnam, and William and Julie Putnam;