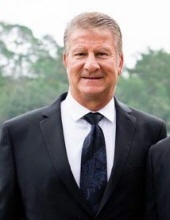 Scotty Leon Stone entered this world pink, beautiful, and perfectly on January 2, 1961. He was instantly loved by his mom and dad Tilley and Buster—who he adored equally in turn. When he was a young boy, he was rarely inside. He could mostly be found lying down in the fields watching the crop dusters fly over him. Countless memories were made out in the yard with his brother Robert and sister Gwen. He loved his parents, his siblings, hunting, football, baseball, and anything else that did not involve being inside.

After graduating high school from Ouachita, he went to Angelina Community College for one year and then came home to Northeast Louisiana University where he played baseball. He lived and breathed baseball, that is until he met Cindy Miletello, the love of his life. Scott loved Cindy with every ounce of his heart and soul and never ceased to treat her like she was God’s gift to earth. Anyone who knows Scott and Cindy knows that anytime he talked about his “Cindy-Lou,” he would grin widely and cut his eyes at his beautiful wife. She was his one and only, and vice versa. To make it simple, she was, without a doubt, the love of his life.

Scott was born to be a father. His two boys, Cody and Cade, were his everything. They were his world and his pride and joy. He was more than just “Dad” to them, though. He was their teacher, coach, mentor, gardener, chef, cheerleader, role model, encourager, advisor, and most importantly—best friend. He was the best father they could have ever asked for.

Every good quality Scott possessed in fatherhood, it was enhanced doubly when he became a grandfather. Chandler and Carson came into his life and changed him forever. He never had daughters, but Chandler proved that if he had, the word “no” would not have existed in his vocabulary. She had her Pops wrapped around her little finger, and he memorized every word to “Baby Shark”, just for her, against his will. Carson, our surprise baby, had him equally enraptured. He and Carson never looked at each other without grinning widely and giggling. He was born to be a father, but he was destined to be a grandfather.

Scott had many hobbies. He loved to cook, grill, fish, golf, work in the yard, and hunt. He instilled a love of hunting and an appreciation for the sport of hunting in Cody and Cade. Cody once wrote a poem for Scott called “Duck Hunting” where he wrote “Duck hunters hunt for the thrill and excitement. It’s getting up at 4:30 a.m. to get dressed to go out in 30 weather. It’s wading through freezing cold crisp water to put out your decoys with your hands shaking and trembling. It’s the sight of ducks fluttering over the decoys. It’s the shot. It’s the limit. It’s life.” This poem, written by Scott’s young son, truly epitomized how he felt towards duck hunting. He could talk to Cody and Cade about duck hunting for hours, so much so that he journaled about every exciting hunting trip he had with his boys. Scott, Cody, Cade, Robert, and his nephew Hunter spent countless hours hunting at the farm. Scott and Robert spent most of their evenings together during hunting season reminiscing on hunts and life. Some of his best memories were eating dinner with the entire family at the camp the opening weekend of duck season. But the best memories are the hunts he spent with his boys Cody and Cade—these memories will live on with his family forever.

He had a warm and enduring relationship with his brother, daughters-in-law, nieces, nephews, brothers-in-law, sisters-in-law, fathers-in-law, mother-in-law, aunts, and uncles. He and Robert could sit and talk for hours. He told anyone he spoke to about how proud he was of Cerene and Stephanie, his daughters-in-law. He treated his brothers-in-law Blake and Tony like brothers and his sisters-in-law Debbie, Stephanie, and Cindy like they were his sisters. Sonney, Sandra, and GiGi treated him as if her were their son. Kim, Michael, Kasey, Hanna, Haley, Connor, Hunter, McKenzie, Luke and Herrington-Kate saw them as more than just an uncle—he treated them as if they were his own.

Scott was fiercely devoted to his wife, family, and friends and loved nothing more than gathering with them. He was the definition of the words protective and loyal. He was truly a gift to those around him. He loved telling stories about his boys, and they loved returning the favor and picking right back at him. One of his favorite stories to tell was about the time Cade “accidentally” shot a tamed mallard in the pond behind their house. One of the boys’ favorite stories was telling everyone about how their dad, who would NEVER get a small dog, got Buster (his 8 lb dog), who was more spoiled than the boys ever were or would be.

He was widely known around West Monroe and Monroe for his coaching abilities. To say he was respected would be an understatement. Every boy he ever coached feared coming to the boys’ house on the weekends because Coach Stone was there. Every boy he ever coached would also say that he changed their lives—he taught them how to love football, how to win games, how to be a teammate, and how to be a man. It became abundantly clear to the Twin Cities that Coach Stone was a special man. He did not lose, and he would be forever credited for the things he did for the football teams he coached. He was fair, humble, organized, strict, and respectful of every student and player he ever came across.

We will miss him every day, every hour, every minute—we are heartbroken. Our family will never be the same. We hope one day that the grief will pass to be replaced by memories of Scott that made us smile. We will miss his laugh, his jokes, his smile, the steaks he grilled, the fish he fried, the way he obsessed over his lawn, the slow grin that passed over him when he waited for Cindy to get his jokes, the smell of his cologne, his “hey baby” every time he picked up the phone or answered the door, his counsel, his hugs, and his love. Not a day will go by that we won’t think about him. He is our hero. Our husband, Dad, Pops, Brother, Uncle, and Friend. We are so proud of him, and we will live life every day in the hopes that he is proud of us. He lived life fully, and he had more courage than anyone we ever knew. He did everything with grace and dignity. We will always save a place for him at the table, we will continue to tell his stories, we will cry for him, laugh at stories of him, and live life to the fullest—as he would want us to.

A visitation will be held for Scott at First Baptist Church in West Monroe, Louisiana from 10:00 a.m. to 12:00 p.m Wednesday, December 22, 2021. A memorial service will begin at 12:00 p.m. with Pastors Mark Fenn and Tom Lowe, and a burial will follow at Mulhearn Memorial Park. The family requests that in lieu of flowers, donations be made to the Scott Stone Scholarship Fund through the West Monroe High School Foundation.