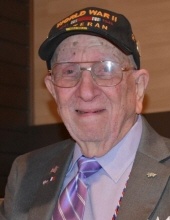 Selwyn Lloyd Dante, a veteran of World War II and a resident of Houston, Texas passed away on Monday, April 11, 2022, at the age of 95. After several months of declining health, Selwyn died peacefully with his family by his side.

Sel, as he was known to many, was born in Dermott, Arkansas on May 30,1926 to father Joseph Dante and mother Gladys Wilenzick Dante. After graduating from Winnsboro High School in 1944, he went on to attend Louisiana State University where he met his future wife June Lustberg Dante. At 18 years old, Sel was drafted and spent nearly 2 years in Europe fighting for our freedom in the Battle of the Bulge. He received numerous accolades for his service including, the highest decoration, by the President of the Republic of France. He was appointed a Chevalier of the French National Order of the Legion of Honor. Selwyn was a proud member of the Veterans of Foreign Wars and served as president of many charitable organizations. He also had the privilege of taking the Honor Flight to Washington, DC. After the war, Sel married June in 1949 and together they lived in Columbia, Louisiana raising their 3 children while running a successful dry goods store. Sel was an avid golf player and skilled bridge player. There was not a single card game he could not play. One of Sel’s greatest feats in golf was making 4 holes-in-one.

To order memorial trees or send flowers to the family in memory of Selwyn Lloyd Dante, please visit our flower store.