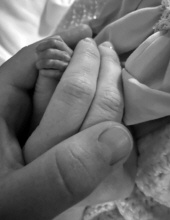 Scarlett Rose and Stella Jane Holmes, infant daughters of Jack and Laura Holmes of Monroe, went to be with the Lord on June 17 and June 20, respectively. Identical twins, the girls were born on June 17, 2021, in Jackson, MS.

Like the nature of identical twins, Scarlett and Stella belonged together. Stella put up a good fight after her sister left this world, but it was not to be. They are both in the arms of Jesus now leaving a host of grieving loved ones behind. The girls will always be loved, never forgotten and were truly bright lights in their parent’s lives, too soon dimmed.

The twins are preceded in death by their maternal grandfather, William P. Lenard Jr.

A private family service for close friends and family will be held Saturday, June 26, 2021.
To order memorial trees or send flowers to the family in memory of Stella Jane Holmes, please visit our flower store.