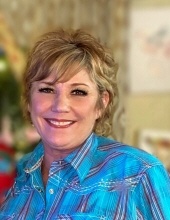 A. celebration of the life of Stephanie LaFaye Guidry, will be held in the chapel of Mulhearn Funeral Home in West Monroe, LA, at 2:00 P.M. on Saturday, March 12, 2022, with Wesley Terry officiating. Visitation will be held from 1:00 P.M. until service time on Saturday.

Stephanie LaFaye was born on December 11, 1968, in Kansas City, MO, and was called home to be with our Heavenly Father on March 2, 2022. I'm sure she was met by her mother, Cheryl Herndon, at the pearly gates with open arms and her RooRoo, one of her many furbabies!

She was known to some as Stephanie, and others referred to her as LaFaye but she was the same no matter what you called her....She was most definitely "one of a kind"!!! She loved to laugh, have fun, was the most loyal friend, always found the best in everyone, was God loving and kindhearted. Her greatest love was for her grandbabies and loved sharing every minute she could with them. She loved animals and had many through her lifetime, the last being Peanut and Magnum. A graduate of WMHS, she also worked many years in the business world!!

In honor of LaFaye, the family requests that you come as you are, in colorful colors as that’s how she lived, a creative colorful life.

In lieu of flowers, please make donations to Ouachita Parish Animal Shelter in West Monroe, or the charity of your choice.

To order memorial trees or send flowers to the family in memory of Stephanie Lafaye Guidry, please visit our flower store.