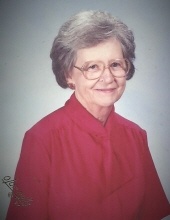 Willene Kincaid Evans was born and raised in Winnsboro, Louisiana, the youngest daughter of Robert “Foster” and Mae Kincaid. She attended Winnsboro schools, graduating in 1945. She attended business school in Houston, Texas, while living with “Sister”, Jessie Mae and Bill Arey.
Willene married Sidney Louis Evans on January 22, 1947. They lived in Winnsboro until Sidney was called back into active duty for the Korean War in 1950, where he was stationed in Sebring, Florida. Although they returned to Winnsboro after his discharge in 1951, during their remaining married life they and their growing family also lived in Marshalltown, Iowa, Arlington,Virginia, Mesquite, Duncanville and Grand Prairie, Texas. She and Sidney moved back to the Winnsboro area upon retirement in 1984. In 2004, she moved to Guthrie, Oklahoma where she resided until her death.
She is preceded in death by her loving husband, Sidney, two grandsons, Elliott Daniel Evans and Donald Ray “Scooter” Ramsey, her parents, Foster and Mae, her sister Jessie Mae Arey, and brothers, Carey, Everett and Robert “Demp” She was also preceded in death by numerous nieces and nephews, including her very loving niece, Harriet Kincaid Stapp.
Willene is survived by her children, Ronny Evans, Lewisville, Texas, Dan Evans (Susan), Mulhall, Oklahoma, Sharon Marcus, Junction City, Kansas, Kenny Evans (Karen) and Alan Evans, Alvarado, Texas. Surviving grandchildren are Wesley Maimone, Amanda Evans Lannon (George), Todd Harris (Erika Schneider), Julia Handt Byers (Jonathan), Lisa Handt, Meghan Evans Wade (Larry), and Andelyn Evans Delgado (Raphael). She also is survived by seventeen great-grandchildren and two great-great grandchildren. Surviving also are nieces, Virginia Kincaid Eddleman and Barbara Kincaid Wade, and nephew Levan Kincaid and numerous nieces and nephews by marriage.
Willene was a lifelong member of the Winnsboro First United Methodist Church. In lieu of flowers, contributions to this church may be given in her name in memoriam.
Funeral services will be held on June 12, 2021 at 1:00 pm at Mulhearn Funeral Chapel in Winnsboro, Louisiana with Pastor Bradley Swire presiding. Interment will be held at the Myrtle Memorial cemetery.
Online Registry/Condolences at Mulhearnfunerlhome.com
To order memorial trees or send flowers to the family in memory of Willene Kincaid Evans, please visit our flower store.