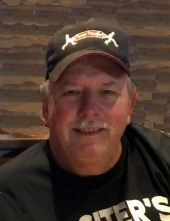 Bill was born in Warren, AR on December 31, 1952, to HT and Margaret Lasiter. He graduated from Springhill High School before attending Vo-tech and beginning a long-time career as a machinist. He worked at a few places before finding a work home at Voith in West Monroe, where he retired after 29 years in 2019.

He married Sandra (Spence) Lasiter on September 10, 1983. On July 6, 1987, he welcomed Brock, his son, best friend, and life-long hunting buddy into the world. Then on February 3, 1990, he welcomed Brooke, his daughter and biggest source of aggravation and entertainment. He loved his family more than anything in this world.

In addition to being a devoted husband and father, Bill was an avid hunter and patient mentor to his children and their friends. He was enjoying his retirement camping, spending time with family and friends, and making custom fishing weights as a side business.

Anyone who knew Bill knew that he could make anything! They also knew he had 2 speeds - slow and slower; but it was important to him that whatever project he was working on was done correctly and to the best of his ability. He was also the kind of person who was always willing to help others and didn’t have to be asked twice for something. He will be deeply missed by his family, friends, and all who knew him.