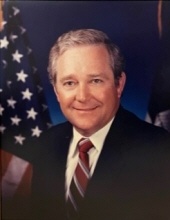 Willie was the middle child of 12 children. He grew up in West Carroll Parish and was the son of a sharecropping Baptist preacher.

As a born leader, Willie’s achievements started at a young age. He was the Captain of the Oak Grove Fighting Tigers football team, was an All-District Linebacker and was named Mr. Oak Grove High School. While still in high school, he worked for KWCL Radio Station in Oak Grove as a DJ, where he met the love of his life, Dorothy Fuller Crain.

After graduating, Willie and Dorothy were married. Willie enlisted in the Air Force and was stationed in Pakistan where he was a Sargent in the intelligence division. Willie attended college at several universities while serving his country.

Willie and Dorothy eventually put down roots in Monroe where they raised their five children. After moving to Monroe, Willie started his career in the automobile business eventually opening his own leasing company and then his own dealership, Crain Chevrolet-Olds-Pontiac in Rayville.

He was an active member of the community and was involved with several organizations including the Scottish Rite and the Bayou Desiard Optimist Club, where he served as president. He was a longtime member of Lakeshore Baptist Church where he taught youth Sunday school for many years. He also coached many of his children’s sports teams. Willie was proud to serve as the NLU (ULM)Athletic Booster Club President and also was the color commentator for the NLU football radio broadcast for many years.

From humble beginnings, Willie’s drive to succeed was guided by his servant’s heart. His political career began when he was elected as a Police Juror for Ouachita Parish, where he served as Jury President. While on the Police Jury, he was responsible for creating the East Ouachita Recreation District as well as making countless other advancements for Ouachita Parish.

Willie then took his political career to the State level when he was elected to the Louisiana State Senate. His intelligence and charisma helped him navigate the legislative process like no other. As a Senator, he was a visionary. He served on multiple committees, including being named chairman of Local and Municipal Affairs as a freshman. Senator Crain was instrumental in enacting legislation, which secured funding for countless projects across Louisiana including the ULM Library, Forsythe Extension, Monroe/West Monroe Convention of Visitors Bureau and the Louisiana Cotton Museum, to name a few. Willie’s influence while serving in the Senate was tremendous. He was selected as Legislator of the Year several times. The positive impact he made on Louisiana, especially his northeast Louisiana district, will be felt for generations to come. To put it simply, he did a lot of good for a lot of people.

Willie continued to work diligently to enrich our community and the lives of everyone around him well into his retirement. He created Louisiana Consulting and Planning where he worked as a consultant and helped obtain funding for Northeast Louisiana municipalities and rural areas.

Senator Crain was larger than life and leaves behind an incredible legacy. However, his greatest legacy of all is his family. If you ever heard him talk about his family, you knew how very proud he was proud of each and everyone of them.
Willie led by example. He taught his family the importance of kindness, compassion, honesty, leadership, service, hard work, family and faith. The Crain Family is blessed to have had such a tremendous man as the head of their family. He will be forever missed.

Funeral Services for Willie E. Crain, Sr., 79, of Monroe, will be held at 1:00 PM on Wednesday, February 16, at Lakeshore Baptist Church in Monroe, LA with Rev. William Smith and Rev. Roger Stoffer officiating. Interment to follow in Mulhearn Memorial Park Cemetery in Monroe under the direction of Mulhearn Funeral Home. The service will be livestreamed on youtube at mylakeshorechurch.

Visitation will be held 5:00 PM until 7:00 PM on Tuesday, February 15 at Lakeshore Baptist Church.

In lieu of flowers, memorials may be made to the Louisiana Baptist Children’s Home, Lakeshore Baptist Church or St. Jude Children’s Research Hospital.

Online Registry/Condolences:www.mulhearnfuneralhome.com
To order memorial trees or send flowers to the family in memory of Willie Eugean Crain , please visit our flower store.